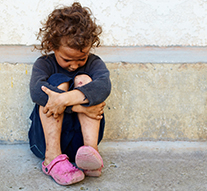 Support for addressing child poverty was especially strong. Seventy-two percent favored an idea currently being promoted in Congress to make pre-kindergarten available to all 4-year-olds in low-income families and expand the availability of Early Head Start programs to more children, age three and under, from low-income families. This included 52 percent of Republicans as well as 90 percent of Democrats.

Three-quarters favored an idea, also currently being promoted in Congress, to establish a commission to develop a plan to reduce child poverty by half in 10 years and to seek to eliminate it within 20 years (including 59 percent of Republicans and 89 percent of Democrats).

There was bipartisan support for raising the federal minimum wage, but not as far as some popular liberal proposals. Three-in-four favored raising the minimum hourly wage from $7.25 to $9.00 over a two-year period (including 58 percent of Republicans and 89 percent of Democrats). Fifty-seven percent were ready to go further and raise it to $10.10, but only one-in-three Republicans were willing to take this step.

Sixty-three percent favored indexing the federal minimum wage to inflation, but this was true of just 46 percent of Republicans.

“Contrary to what we see in Congress, when Americans consider federal options for addressing poverty they find quite a lot of bipartisan common ground for taking action,” said PPC Director Steven Kull. “There is a clear consensus that the federal government has a role to play in fighting poverty.”

Overwhelming bipartisan majorities favored establishing federal job creation programs to employ people who have been unemployed for a period. However there was division on whether these programs should be instituted under current conditions or whether the federal government should have them ready to if economic conditions worsen. For the most popular program, which would employ young people in public land preservation projects, 57 percent favored starting the program now, but this was true of only 46 percent of Republicans.

There was support for making the Earned Income Tax Credit (EITC) available to more low-wage workers without children. Six-in-ten favored raising the maximum amount they can make and still be eligible for EITC from $14,820 to $18,000 (51 percent of Republicans, 67 percent of Democrats).

Six-in-ten, including 54 percent of Democrats, approved of the conservative idea of giving states the option of receiving federal poverty program funds in the form of block grants for some programs, which the states would then administer with federal regulation.

Addressing the problem of nonpayment of wages, which tends to disproportionately hurt low-income workers, 89 percent favored a proposal saying that if a company under a government contract is found guilty of not paying wages, the company will lose the right to bid on government contracts.

In previously released findings, when told about current levels of benefits for the Supplemental Nutrition Assistance Program (SNAP)—commonly known as ‘food stamps’—large majorities favored increasing them including two-thirds of Republicans and nine-in-ten Democrats. However, there was also overwhelming bipartisan support for the conservative idea of limiting what SNAP benefits can be used for—disallowing sweetened sodas or candy.

Support for Medicaid expansion was quite strong, with two thirds supporting it in their state, including 62 percent in states that have not elected to expand it.

The survey was conducted online with a national probability-based sample of 7,128 registered voters, provided by Nielsen Scarborough from Nielsen Scarborough’s sample of respondents, recruited by mail and telephone using a random sample of households. The margin of error was +/- 1.2 percent.

The study was unique in that respondents received a short briefing on the proposals for reforming federal poverty program and evaluated strongly stated arguments both for and against each option before making their final recommendations. The briefing and the pro and con arguments were developed and reviewed by key staffers from both parties, who deal with these issues from Senate Finance Committee and the House Ways and Means Committee. In addition, specialists were consulted representing the spectrum of opinion on the issues.

The sample also included samples of approximately 400 or more from eight states—Texas, North Carolina, Florida, Ohio, Virginia, California, Maryland and New York. Despite the range from very red to very blue, the results in all the states were largely the same as for the national sample.

The report can be found at: http://vop.org/wp-content/uploads/2017/05/Poverty_Report.pdf

The survey’s questionnaire can be found at: http://vop.org/wp-content/uploads/2017/05/Poverty_Quaire.pdf