Sharp Drop in World Views of US, UK: Global Poll 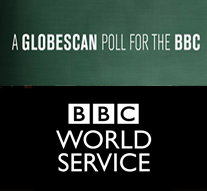 Negative views of US influence in the world have increased in the majority of countries surveyed in the latest global country poll for the BBC World Service. Compared to 2014, when the poll was last conducted, double-digit increases in negative views of the US, rising to majorities, are now found in several of its NATO allies, including the UK (up from 42 to 64%), Spain (44 to 67%), France (41 to 56%), and Turkey (36 to 64%). Negative opinion has also sharply risen in Latin American nations Mexico (up from 41 to 59%), and Peru (29 to 49%). In Russia, negative views of the US have also increased, from 55 to 64 percent.

The Country Ratings Poll was conducted by GlobeScan/PPC among 18,000 people in 19 countries between December 2016 and April 2017. It asked respondents to rate 16 countries and the EU on whether their influence in the world is “mostly positive” or “mostly negative.”

On average, across the 17 countries that were surveyed in both 2017 and 2014, negative views of US influence in the world have gone up by six points to nearly half (49%), while positive views have dropped by five points to about a third (34%). The US showed the most substantial decline in ratings out of all the countries polled this year.

The poll also reveals that views of the United Kingdom, historically quite positive, have gone down, led by pronounced drops in positive views among EU citizens in Germany (down from 51 to 35%), France (72 to 63%), and Spain (41 to 34%). Similar declines are also seen in several of the Commonwealth nations such as Pakistan (down from 39 to 20%), India (43 to 33%), and Canada (80 to 73%). Attitudes in China buck this trend, with favourable opinion of the UK among the Chinese rising markedly, from 39 to 73 per cent. A slight majority of 51 per cent across the 17 tracking countries still regards British influence in the world as mostly positive, but this is down four points since 2014.

In the ranking of favourably-viewed nations, Canada and Germany are followed by Japan, whose perceived positive influence has strongly bounced back (56%, up 6 points), ending a correction period that started in 2013. France (52%, up 4 points) and the EU (48%, up 3 points) complete the leader board of those countries that have seen their positive influence capital grow since 2014.
Attitudes towards the perceived world influence of other rated countries reflect recent geopolitical tensions. Views of Russia continue to be quite negative, sustaining a sharp decline that began in 2013. On average, across the 17 tracking countries, 49 per cent hold negative views of Russia. Russian opinion aside, the only country with a majority leaning favourably towards Russia is China, where positive ratings have gone up from 55 to 74 per cent. Public opinion towards North Korea is also at its lowest since tracking began, with 59 per cent across the tracking countries expressing an unfavourable view towards the Pyongyang regime (up 3 points since 2014, and swamping positive feelings at 17%). Yet, Iran continues to be the least-favourably viewed nation, with 61 per cent rating its influence negatively across the tracking countries.

Steven Kull, Director of PPC, commented: “Though views of the US slipped some in President Obama’s later years, ratings for the US have now gone all the way back to levels they were at the end of the George W. Bush administration.”

A total of 17,910 citizens across 19 countries were interviewed face-to-face or by telephone between December 26, 2016 and April 27, 2017. Polling was conducted for BBC World Service by the international polling firm GlobeScan and its research partners in each country, together with the Program for Public Consultation (PPC) at the University of Maryland. Countries were rated by half samples in all countries polled except for India. In five of the 19 countries, the sample was limited to major urban areas. The margin of error per country ranges from +/- 3.1 to 5.2 per cent.

The poll also highlights that the global public has mixed feelings about the current influence of some emerging economies. While views of Brazil still lean to the positive—on average, 38% positive vs 30% negative across tracking countries—there has been a six-point drop in positive views, fuelled by diverse regions and aggravating a decline that started in 2013. The largest decreases are found in Indonesia (down from 56 to 36%), the US (55 to 40%), Canada (56 to 41%), Germany (21 to 6%), Spain (35 to 21%), and Peru (61 to 48%). Interestingly, Brazilians themselves are leading this trend, with positive views of their own country plunging from 66 to 30 per cent—the only surveyed country where fewer than half see their own nation in a positive light.

Global views of China have also become more negative, although less drastically. On average, across the 17 tracking countries, positive ratings of China have dropped (from 43 to 41%) and negative ratings have gone up (from 40 to 42%). However, this moderate overall movement masks some dramatic changes in opposite directions in specific countries. Favourable views have dropped from 52 to 28 per cent in Indonesia, while rising from 33 to 55 per cent in Mexico. However, views in Africa, where China is making major investments, continue to be strongly positive (83% in Nigeria, 63% in Kenya). Despite Chinese warm opinion of Russia these days, only 44 per cent of Russians reciprocate with a positive view of China.

Views of India are stable, with average positive views across tracking countries at 37 per cent (down by 1 point), and negative views at 39 per cent (unchanged from 2014)—but this masks some major movements. Most strikingly, negative views have jumped in China (from 35 to 56%), and in Brazil (36 to 57%). In Nigeria, positive views have collapsed from 64 to 47 per cent. On the other hand, negative views have dropped from 50 to 35 per cent in Spain, while positive views have jumped from 45 to 56 per cent in the UK (by far the most favourable country towards India).
The issue of Brexit notwithstanding, positive views of the European Union have gone up from 45 to 48 per cent. Even in the UK, positive views are up to 55 per cent—the highest level since 2009, although it is unclear whether this reflects second thoughts about Brexit or more satisfaction with an EU that is seen as having been pushed to a comfortable distance. The favourable trend in views of the EU is also led by strong increases in positive ratings from countries where its trade relationships have strengthened, including China (from 32 to 66%), Mexico (37 to 54%), and Canada (64 to 70%).

GlobeScan’s Associate Director Lionel Bellier commented: “The poll suggests that perceptions of the influence of the UK in the world, at a high in 2014 after 10 years of tracking, may have taken a toll with the Brexit referendum. On the other hand, and despite uncertainty around the terms and impact of the upcoming separation with the UK, the perceived influence of the EU seems to be stronger than it was before the UK voted itself out.”

For full methodology, question wording, and detailed results, including region-by-region data for all key questions, please see the drop-down links at the bottom of this article.

For more details, please visit www.GlobeScan.com or www.WorldPublicOpinion.org as well as the GlobeScan Espresso Blog at http://www.globescan.com/news-and-analysis/blog.html

GlobeScan Incorporated is a strategy and insights consultancy, focused on helping our clients to build long-term trust with their stakeholders. Offering a suite of specialist research and advisory services, GlobeScan partners with clients to meet strategic objectives across reputation, sustainability and purpose.
GlobeScan conducts research in over 90 countries and is a signatory to the UN Global Compact. Established in 1987, GlobeScan is an independent, management-owned company with offices in Toronto, London, and San Francisco. www.GlobeScan.com

The Program for Public Consultation (PPC) of the Center for International and Security Studies at the University of Maryland, undertakes research on attitudes in publics around the world on a variety of international issues and manages the international research project WorldPublicOpinion.org

BBC World Service is an international multimedia broadcaster, delivering a wide range of language and regional services on radio, TV, online and via wireless handheld devices. It uses multiple platforms to reach its weekly audience of 192 million globally, including shortwave, AM, FM, digital satellite and cable channels. Its news sites include audio and video content and offer opportunities to join the global debate. BBC World Service offers its multilingual radio content to partner FM stations around the world and has numerous partnerships supplying content to news websites, mobile phones and other wireless handheld devices as well as TV channels. For more information, visit bbc.com/worldservice.