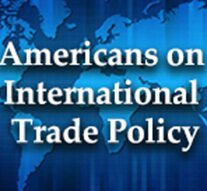 A new in-depth survey from the University of Maryland finds that large majorities of Americans have concerns about the impact of international trade on the US economy, job security, and inequality, but an overwhelming 87% support the US, together with other countries, continuing to promote the growth of trade through a set of agreed-upon rules that seek to lower barriers to trade and ensure trade is done fairly.  This includes 84% of Republicans as well as 93% of Democrats.

The survey of 2,993 registered voters was conducted by the Program for Public Consultation (PPC) at the University of Maryland, and released today by the nonpartisan organization Voice of the People.

The survey was unique in that respondents were given briefings on issues and asked to evaluate pro and con arguments before coming to their conclusions.  The content was reviewed by experts who are trade skeptics as well proponents of trade, to assure that the briefings were accurate and balanced and that the strongest arguments were being made on both sides.

Asked to evaluate a series of arguments for and against promoting international trade large majorities found convincing the critiques as well as the arguments in favor.

“Americans see international trade as having both major costs and major benefits, which may create an impression that support for trade is weak,” commented Steven Kull, director of PPC. “But, ultimately Americans come down firmly on the side of continuing the post-war program of furthering the growth of trade through an international rules-based system.  Rather than putting the brakes on trade they favor other means to mitigate its negative effects.”

The survey found robust support for various means to mitigate the negative effects of trade.

Contrary to the bipartisan consensus on broader principles, for many foreground trade issues that have been immersed in partisan conflict, the public has divided along party lines:

Broadly, Democrats show greater support for international trade than Republicans.   “This stands in sharp contrast to Congressional votes on contested trade agreements over the past thirty years,” notes Saul I. Stern Professor I.M. “Mac” Destler, who was one of the primary investigators of the study.  “On a range of regional free trade agreements from NAFTA to CAFTA as well country-specific pacts,” he notes, “a majority of House Democrats voted ‘No,’ while preponderant majorities of Republicans were in favor.”

The survey was conducted online from April 10 – May 13, 2019 with a national probability-based sample of 2,993 registered voters, provided by Nielsen Scarborough from Nielsen Scarborough’s sample of respondents, who were recruited by mail and telephone using a random sample of households. The national sample of 2,993 registered voters has a margin of error of +/- 1.8%.  Some questions were asked to a half sample in which case the margin of error was +/-2.5%.