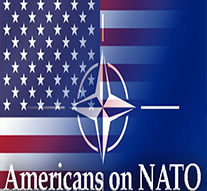 Celebrations of the 70th anniversary of NATO on April 4 may be clouded by concerns about statements by Donald Trump questioning the US commitment to NATO, the North Atlantic Treaty Organization. However, a new survey finds that 83% of American voters favor the US continuing to be part of NATO, including 90% of Democrats, but also 77% of Republicans and 76% of those who voted for Trump.

The survey of 2,416 registered voters was conducted by the Program for Public Consultation (PPC) at the University of Maryland, and released today by the nonpartisan organization Voice of the People.

Concerns about the US commitment to NATO have been sparked by Donald Trump’s characterization of NATO as “obsolete,” and his statements that he might consider withdrawing the US from NATO if other NATO members do not increase their military spending.

Respondents were informed about the controversy stemming from US pressure to get European NATO allies to spend more on their militaries. While the European allies have agreed to raise their spending to two percent of GDP, many have failed to do so.

Presented three options, only 12% endorsed pressing European allies “to spend more on their military and say that if they do not the US will disengage from Europe militarily and possibly withdraw from NATO”—21% of Republicans, 4% of Democrats. Thirty-five percent favored pressing the Europeans but not making threats.

The most popular idea—supported by 50% was to “remain part of NATO but reduce US military investments in Europe to bring them more in line with the level that the Europeans make” (Republicans 47%, Democrats 50%).

“Only a small minority of Americans show interest in withdrawing from NATO or using the threat to do so as a source of leverage,” commented Steven Kull, director of PPC.

To ensure that respondents understood the issue, they were first given a short briefing on NATO including the commitment to defend any ally that comes under attack. The content was reviewed by experts on the issues to ensure the briefing was accurate and balanced, and the strongest arguments were presented.

Respondents were then asked to evaluate arguments for and against remaining in NATO. The arguments in favor of remaining were found convincing by very large majorities. These included the argument that Russia is still a potential threat to Europe and it is in the US’ interest to help Europe contain them (85% found this convincing), as well as the argument that NATO is a useful symbol for each country’s commitment to freedom and democracy, and a necessary tool to ensure the continuation of free and open trade (82% convincing). Large majorities of both parties found these arguments convincing, though Democrats had larger numbers (89% in both cases) than Republicans (82%, 75% respectively).

Far fewer – no more than four in ten – found the arguments against remaining in NATO convincing. They included the argument that Russia is not a real threat and US security commitments enable countries to be unnecessarily provocative (40%), as well as the argument that having a military alliance targeted clearly at Russia violates the post-Cold War understanding between the US and Russia, and is therefore destabilizing (35%). Republicans were more likely to find these arguments convincing (51% and 42%) than Democrats (28% for both).

Asked for their final recommendation, 83% of respondents favored continuing to be a part of NATO, including 77% of Republicans and 90% of Democrats.

Among millennials (age 18-34), 77% were in support. Steven Kull comments, “It is interesting that millennials, who came of age after the end of the Cold War are still overwhelmingly in favor of the NATO alliance.”

The sample was also divided six ways according to the Cook Partisan Voting Index. In the reddest one-sixth of districts, support was only slightly lower than in the bluest districts (red 78%, blue 86%).

Respondents also evaluated arguments in favor of the three options for dealing with NATO allies’ failure to meet the two percent spending level. The argument in support of threatening to withdraw was found convincing by 56%, with a sharp contrast between Republicans (76%) and Democrats (39%). The argument against threatening to withdraw, but supporting pressure on the Europeans was found convincing by 80%, including 72% of Republicans and 87% Democrats

The argument for the third option—which highlighted that Europe spends far more than Russia on its military—was found convincing by about three quarters, overall and for both parties. In the final assessment, the option for the US to reduce its spending to bring it in line with European spending proved to be the most popular idea, endorsed by 50% overall (Republicans 47%, Democrats 50%).

The survey was conducted online from January 16 – February 11, 2019 with a national probability-based sample of 2,416 registered voters, provided by Nielsen Scarborough from Nielsen Scarborough’s online panel of respondents, who were recruited by mail and telephone using a random sample of households. The survey has a margin of error of +/- 2.0%.