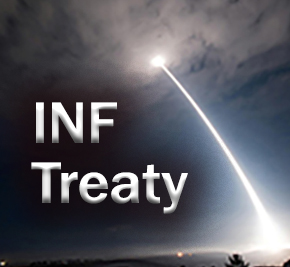 As the Trump administration has formally initiated the process of withdrawing from the Intermediate-range Nuclear Forces (INF) Treaty with Russia, saying that Russia has persistently violated the Treaty, a just-completed survey of American voters finds that two thirds oppose taking this step, opting instead for staying within the Treaty and redoubling efforts to work with the Russians to resolve their disputes about compliance.  Those opposed to withdrawing from the Treaty include 55% of Republicans and 51% of Trump voters, as well as 77% of Democrats.

The Trump administration announced on October 20, 2018, that it intended to withdraw from the Treaty, and formally initiated the six-month process of withdrawal on February 2, 2019.

The survey, fielded January 7 to February 1, was conducted by the Program for Public Consultation (PPC) at the University of Maryland in conjunction with the University’s Center for International and Security Studies at Maryland.   The questions released here are part of a larger survey on US nuclear weapons policy that will be released in the near future.  The content of the survey was reviewed by numerous experts from across the spectrum of opinion on the issues to establish that the briefing was fair and accurate and that the arguments were the strongest ones being made on both sides.

Respondents were given a short briefing on the history of the INF Treaty and told that it was signed by former President Ronald Reagan and Mikhail Gorbachev in 1987 and that it prohibits the U.S. and Russia (then the Soviet Union) from having land-based missiles with flight ranges between 310 to 3,420 miles.  They were told that the US and Russia are both currently accusing the other of cheating by building weapons prohibited by the Treaty and that both deny that their weapons violate the terms of the Treaty.

They were told there is a debate about whether the US should withdraw from the Treaty and asked to evaluate arguments for and against withdrawing.

When asked for their final recommendation just 30% favored the option to “start the six month process of withdrawing from the INF Treaty, and if the Russians do not make the changes the U.S. seeks, withdraw from the Treaty.”  Sixty-six percent favored the option to “stay within the INF Treaty and redouble efforts to work with the Russians to address concerns of both sides.”

An overwhelming 77% of Democrats opposed withdrawing, while just 20% favored it. Among the one-sixth of the sample that lives in the most Democratic districts 71% were opposed.

Steven Kull, director of PPC commented, “Even after evaluating a strongly-stated argument in favor of withdrawing from the INF Treaty, bipartisan majorities, including a slight majority of Trump voters,  favored staying in the Treaty.  Concerns about Russian cheating, while substantial, were not strong enough to override support for this treaty-based effort to control nuclear arms.”

The argument in favor of withdrawal asserted that Russia has been in violation for years and that two presidential administrations have tried to bring Russia in compliance, but without success.  It insisted that the US cannot let Russia cheat without consequences and that the US should initiate the process of withdrawal in hopes that Russia will admit its violation and make the necessary changes.  The argument also made the case that the Treaty constrains the US from building weapons in Asia, while China, unconstrained by the Treaty, has been building many INF weapons.

This argument was found convincing by a robust 65%, including 80% of Republicans and 53% of Democrats.

The counter-argument stressed that the Treaty has been in place for more than 30 years, and that our NATO allies still support it because they do not want to make it legal again for Russia to have weapons that destroy European capitals with almost no warning.  It argued that the United States should make a more concerted effort to negotiate, pointing out that Russia is still willing to work with the United States on this.  The value of being able to place such weapons in Asia or Europe was also challenged by noting that US allies in both regions do not want the weapons placed there.

This argument was found convincing by a slightly larger majority of 68%, including 58% of Republicans and 77% of Democrats.

The survey was conducted online from January 7 – February 1, 2019.  The sample that answered the questions herein included 1,131 registered voters with a margin of error of +/-2.9%.  The survey was conducted online with a national probability-based sample provided by Nielsen Scarborough from Nielsen Scarborough’s larger sample of respondents, who were recruited by mail and telephone using a random sample of households.

2019-02-06
Previous Post: Major Study Finds 2020 Voters Seeking Candidates Who Will Be More Responsive to the People
Next Post: Over Eight in Ten American Voters Favor US Continuing to Be Part of NATO