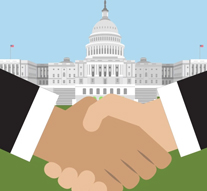 Overwhelming bipartisan majorities support proposed legislation that calls for extending the period that former government officials must wait before they can lobby the government and prohibiting former executive branch officials from ever lobbying on behalf of foreign governments.  Similarly large majorities favor ending the support the government currently provides for former US Presidents.

The survey of 2,482 registered voter was conducted by the Program for Public Consultation at the University of Maryland (PPC), and released today by the non-partisan organization, Voice of the People. To ensure that respondents understood the issue, they were given a short briefing on the proposal and asked to evaluate arguments for and against.  The content was reviewed by Congressional proponents and opponents of the legislation to ensure that the briefing was accurate and balanced and that the arguments presented were the strongest ones being made.

Extending the waiting period for senior Congressional staffers from the current one year to two years—as called for in H.R. 383 by Rep. Posey [R-FL-8]—was approved by 77%, including 79% of Republicans and 74% of Democrats.

Currently, senior executive branch officials are prohibited from lobbying their former agency for 1-2 years depending on how senior they were. H.R. 1934 proposed by Rep. Gallagher [R-WI-8], S.522 by Sen. Tester [D-MT], H.R. 796 by Rep. De Santis [R-FL-6] and H.R. 484 by Rep. De Fazio [D-OR-4] call for extending this period to five years for all such officials.  This proposal was supported by 75%, including 77% of Republicans and 71% of Democrats.

“The American public seems to be eager to drain the swamp in Washington,” commented Steven Kull, director of PPC.

However, support did not go so far as to call for a lifetime ban on former members of Congress lobbying as called for by S.1189 by Sen. Bennet [D-CO] and H.R 4187 by Rep. Hollingsworth [R-IN-9]. Only 29% of respondents supported it, including 33% of Republicans and 24% of Democrats.

Currently, Americans can act as lobbyists for foreign governments, provided they register and report their activities to the US government.  Senior executive branch officials are only limited by the 1-2 year restriction for lobbying their former agency.  Proposed bills H.R. 796 by Rep.DeSantis [R-FL-6] and H.R. 484 by Rep. De Fazio [D-OR-4] prohibit former senior executive branch officials from any lobbying on behalf of a foreign government for the rest of their life.  This proposal was favored by 75%, including 81% of Republicans and 70% of Democrats.

The sample is large enough to enable analysis of attitudes in very Republican and very Democratic districts (based on Cook PVI ratings of the district the respondents live in).  In all cases, red districts were just slightly more supportive of the proposed restrictions.

The survey was conducted online from September 7- October 3, 2017 with a national probability-based sample of 2,482 registered voters, provided by Nielsen Scarborough from Nielsen Scarborough’s sample of respondents, who were recruited by mail and telephone using a random sample of households. The margin of error was +/- 2.0%.