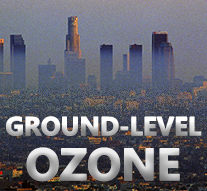 A new survey finds that six in ten voters oppose proposed Congressional legislation that postpones, for eight years, current requirements to lower ground ozone levels.  Such ozone contributes to the creation of smog and is harmful to humans, but lowering ozone levels incurs economic costs.

The legislation, H.R 806 Ozone Standards Implementation Act of 2017, passed the US House on July 18,2017 and is now pending in the Senate.

The survey was conducted by the Program for Public Consultation (PPC) at the University of Maryland, with a sample of 1,999 registered voters and released today by the nonpartisan organization Voice of the People.

Respondents were also divided six-ways according to the Cook ratings for how Democratic or Republican their district votes, from very red to very blue.  In very red districts, 54% opposed the legislation, while in very blue districts 66% were opposed.

“Though air quality has improved over the least decades, a majority of Americans continue to press for further improvements, even when presented the costs,” commented Steven Kull, director of PPC.

To ensure that respondents understood the issues, they were first given a briefing and evaluated three arguments in favor and three arguments against the legislation.  The content was reviewed by proponents and opponents of the proposals to ensure the briefing was accurate and balanced, and that the strongest arguments were presented.

Respondents were told that in 1990, with bipartisan support, Congress passed an update of the Clean Air Act, which called for gradually reducing ground-level ozone. The Environmental Protection Agency (EPA) was charged with establishing the standards for this process and working with the states to meet them. In 2008, the EPA lowered the maximum ozone allowed to 75 parts per billion. Though some states had not yet reached this level, in 2015 the EPA further lowered the ozone level to 70 ppb, requiring states to develop a plan for meeting this standard by the early 2020s.

Asked how important they think it is to lower the maximum allowed ozone level, 76% said they think it is very (48%) or somewhat (29%) important.  Among Democrats, nine in ten said it was important, as did six in ten Republicans.

Respondents were informed about the costs and benefits assessed by the EPA.  These included both economic and health-related effects.

They then evaluated arguments for and against legislation delaying, by eight years, the requirement for states to develop a plan to lower their ozone levels by the early 2020s to 70 ppb.  The argument in favor found convincing by the largest number—59%—went as follows:

To meet this new ozone standard, states could be required to place restrictions on everything from manufacturing and energy development to infrastructure projects like roads and bridges, hurting their economy. This will hurt the many people who are already having a hard time economically. This bill would give states more time to get ready for the new standard, thus balancing the needs for better air quality and economic growth.

The other pro arguments, saying that the EPA is moving too fast and that the requirements are too demanding for some states with especially high ozone levels, were found convincing by half.

The arguments against the legislation did substantially better, in all three cases being found convincing by more than seven in ten.  Seventy-four percent found convincing both the arguments that, “Extensive research has clearly shown that ozone is dangerous, especially to children, the elderly, those with respiratory illnesses, and unborn fetuses.”  The same number found convincing the argument that the EPA is already giving more time to states for which it is especially difficult to lower their ozone levels, so it does not make sense to ease up on the standards for all the states.

Asked, in conclusion, whether they favored or opposed “legislation in Congress that delays, by eight years, the requirement that states undertake a step-by-step plan for lowering the maximum allowed ozone levels from 75 ppb to 70 ppb,” 61% said they were opposed, including 76% of Democrats and 62% of independents.  However, 55% of Republicans favored the legislation.

The survey was conducted online from March 9-23, 2018 with a national probability-based sample of 1,999 registered voters, provided by Nielsen Scarborough from Nielsen Scarborough’s sample of respondents, who were recruited by mail and telephone using a random sample of households. The national sample has a margin of error of +/- 2.2%.