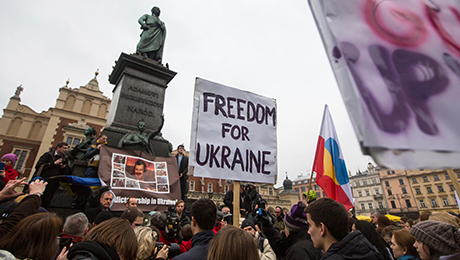 In the West and North of the country large majorities do want to move closer to Europe, but majorities in the South and especially the East are opposed, in some areas very strongly.

“The movement toward the EU, supported by Ukrainians in the Western and Northern parts of the country, has provoked a reaction in the Eastern part of the country that Russia has effectively exploited.” said Steven Kull, director of the Program for Public Consultation, and the study’s primary investigator.

The greatest potential consensus lies in Ukraine affirming a neutral position between the EU and Russia. Overall 63 percent say they could find this at least tolerable, while 31 percent say it is unacceptable. Majorities in three of the major regions find this at least tolerable (North 71 percent, South 65 percent, East 74 percent) as does 67 percent even in in the rebel-held areas. The West however is divided between those who would find it at least tolerable (48 percent) and those saying it would be unacceptable (48 percent).

As violence between the Ukraine government and Russian-supported separatist rebels in the East has grown, more voices have called for the United States to provide military aid to the Ukraine government. A majority of Ukrainians support this move, but the majority is slight (52 percent) and views are highly disparate among the various regions. Large majorities favor the idea in the West (77 percent) and the North (61 percent). However, in the East, 62 percent are opposed (53 percent strongly) while the South is divided (46 percent in favor, 43 percent opposed).

A related finding is that only 48 percent approve of the government using military force to try to regain territory held by separatist groups in eastern Ukraine. Majorities favor it in the West and and North, views are divided in the South, and a large majority opposes it in the East. Large majorities in all regions approve of the September 2014 Minsk agreement, which was the basis for the February Minsk Agreement. In both rebel-held areas and Ukrainian-controlled Donbass, large majorities approve of the agreement.

While there is widespread opposition to moving westward in the East and South, only small minorities want to move closer to Russia. The most common sentiment is to have equally strong relations with the EU and Russia – a position held by 55 percent in the East and 45 percent in the South. In the East only 26 percent favor being closer to Russia as do 20 percent in the South. Even in the rebel-held areas of the Donbass less than half (45 percent) favor stronger relations with Russia. Joining the EU is viewed as unacceptable by two thirds.

Views of Vladimir Putin’s role in current crisis are quite negative—79 percent disapprove of how he is dealing with the crisis, including 72 percent in the South and 53 percent in the East. In rebel-held areas, though, three in five approve.

Very large majorities in all regions reject Putin’s position that Russia has the right to intervene in other countries to protect Russian citizens and Russian speakers (87 percent overall). In the rebel-held areas views are divided. Russian speakers themselves overwhelmingly reject it.

KIIS fielded the survey with a national sample of 1,005 respondents February 13-24. In addition an oversample of 403 interviews was conducted in the Donbas region including the oblasts of Donetsk and Luhansk, with 200 in the rebel held areas and 203 in the Ukrainian held areas. The margin of error is plus or minus 3.1% for the country as a whole and higher more for specific regions.

A key question explored was how widespread separatist sentiments are in the Eastern part of the country, especially in the rebel held areas. In the East overall, one fifth favor secession for the Donbass region. Two thirds supports maintaining the unity of Ukraine, but half of this group also favors giving greater autonomy to part of the Donbass region that includes Donetsk and Luhansk. In the rebel-held areas four in ten favor secession– with a quarter also favoring being annexed by Russia. A third favor preserving the unity of the nation but giving greater autonomy to parts of the Donbass region. A sixth wants to preserve the current situation.

The full report of the survey results can be found at https://worldpublicopinion.net/wp-content/uploads/2016/03/Ukraine_0315.pdf

The survey’s questionnaire can be found at https://worldpublicopinion.net/wp-content/uploads/2016/03/Ukraine_quaire.pdf